Almost all the pictures were taken at the malacological museum Haus der Natur Cismar (www.hausdernatur.de) (collection Vollrath Wiese), with Vollrath Wiese's help and photo equipment. The species of which there are no images shown in the book have usually not been present in the museum collection. Donations of such species would be very welcome. These could later be photographed and perhaps shown in a future edition of this book.

The highlight of this book is a special 80-page insert (quick identification guide, Quick ID). This so-called "Swiss brochure" is inserted at the end of the book and can be opened separately: 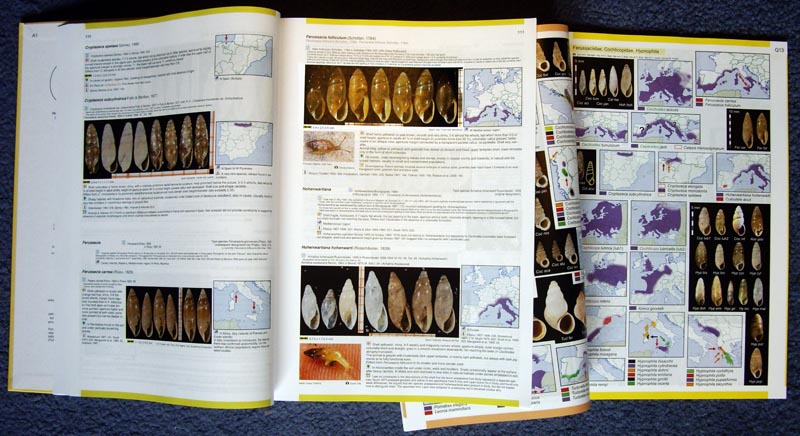 The Quick ID consists of maps and photos, and allows very rapid pre-determination of the species. In 70-80% of cases the species may already here be well recognized. The Quick ID can be opened separately (you can always have 3 pages open simultaneously, and put a left-hand page of the Quick ID onto the right-hand page section of the main book, or even hide some Quick ID pages below).

The Quick ID has been specifically designed to enable faster work. Working quickly and efficiently is essential in today's scientific community. With more than 2000 species it is very difficult to keep track. Even in difficult groups the Quick ID allows very quickly to narrow down possible options and then look up the species accounts in the main part.
The Quick ID was even tested by non-experts without any previous knowledge of snails. They succeeded in a relatively short time to identify on species level a number of simple species like Ena montana or Cochlicella acuta. This book does not work with identification keys. Mollusks can be determined most quickly with concise compilations of images and distribution maps.

In the main part of the book (the left and the center of the image) for each species is given a brief description, size, habitat, distribution map (the same as in the Quick ID), and, if known, information on the biology, reproduction and threat. Most species are equipped with 4-8 photos of shells where you can see a little the species variability.

Suitable for student field trips, zoological identification exercises indoors and outdoors, ecological or archaeological research projects, malacological research, and for administrative matters in nature, especially when it comes to a reliable determination of endangered species.

These book views illustrate the special mode of the binding. The Quick ID is bound at the end as a "Swiss brochure", and also has its own title page with a table of contents. 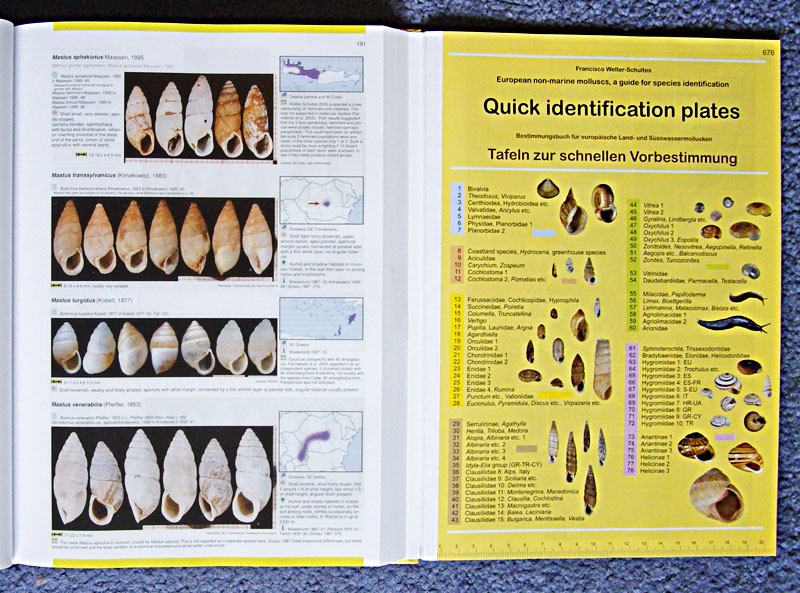 One page as an example of how the content was arranged. On the right side the title page of the Quick ID.


Molluscs and their importance

Molluscs are important organisms in nature conservation, particularly in freshwater habitats. Many native species are threatened and for their protection they need to be identified reliably.
So far there has been no comprehensive field guide that contained also the species of southern Europe.

Some species act as pests in agriculture. A reliable identification of species and knowledge about their life cycles are indispensable for their controlling.

In modern forest management habitats of soil-inhabiting mollusc species are easily destroyed. It is important to know exactly which species occur in a forest.

In medicine and veterinary medicine some mollusc species have importance as temporary hosts for parasites. It is essential to distinguish them from similar species reliably.

European molluscs are repeatedly dispersed overseas and may establish populations. They have also high importance in other continents such as North America, South America and Australia/New Zealand. It is very important to identify quickly alien species, know if they could have come from Europe, determine which species was introduced and get to know quickly what is known about its life cycle and dispersal abilities. Alien mollusc species can have tremendous impact in foreign regions.

This book appeared in October 2012. In the following year more than 500 copies were sold worldwide, which is sensational for such a special topic. The book has established itself as an important standard reference work in the European mollusc research.

Order directly in our online shop, just follow one of these links:

In English (USA and Canada):   http://www.wissenladen.de/catalog/planet-poster-editions-european-nonmarine-molluscs-orders-from-p-86.html
(If the text is displayed in German, just click at the English flag at the right side.)